OnePlus 3 Review In the Works: Preview

It is as awesome as they say!

I
will be giving it away after the review and HONESTLY, I am going to miss it. I didn’t think any phone as of late could pry me away from my Galaxy S7 Edge, but I was wrong.

There is just something about that thin, cool metal body, that insanely quick fingerprint sensor, that notification slider, that stupidly fast charging, those neat little short cuts incorporated into the operating system, and FINALLY THAT SPEED!

I have seriously found the OnePlus 3 to be the fastest android phone I have tested.

I do have a bit of a ram mod that was supplied by OnePlus themselves (cache value set to 32 instead of 20). The thing flies. Apps open so quickly and switch so quickly that I could say that I get whiplash. I haven’t experienced slow downs or many annoyances. After OnePlus supplied me with a proper sRGB calibration mode for the display, I have been a pretty happy camper. 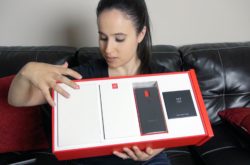 Battery life gets me through the day on moderate use. If heavy use is needed, I just pop it on the charger for a half hour and never deal with it being too little. Plus that fast Dash car charger is a nice touch. GET IT!

So if you don’t need the extra flagship features such as waterproofing or inductive charging, this is a nice choice! Also, who can argue with the price!

I once was pretty upset with OnePlus but they have since turned many things around. No more invites! I approve!

previous My Favorite Place To Get Skins
next OnePlus 3 Review (In-Depth): WOW!!!